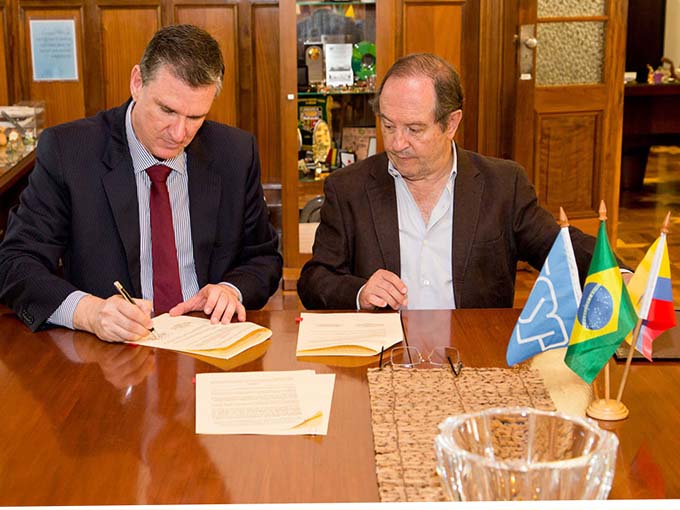 The document was signed by the Dean Luis Gustavo Nussio and by the Ecuadorian Minister Javier Ponce Cevallos (credit: Gerhard Waller)

The Luiz de Queiroz College of Agriculture (USP/ESALQ) signed, last Wednesday, November 18th, a framework agreement with the Ecuador’s Ministry of Agriculture, Livestock, Aquaculture and Fishing (MAGAP). The visit of the Minister, Javier Ponce Cevallos, aimed to start the negotiations to formalize a partnership from which ESALQ must offer the Master Program in Plant Science to the Ministry. The agreement will open doors to the development of possible academic researches between the two countries. In the occasion, the Minister was welcomed by the ESALQ’s Dean, Luis Gustavo Nussio, by the vice-dean, Durval Dourado Neto, by the president of graduate committee, Severino Mathias de Alencar and by the Professor from the Biosystems Engineering Department, Paulo César Sentelhas.

According to Alencar, the existence of an interinstitutional Master Program with a foreign university requires the consent of CAPES. Furthermore, the president evaluates methods that benefits Brazilians and Ecuadorians that will be involved in this Program. “The intention is to receive the students from Ecuador and also send our students, creating, then, knowledge advancement and scientific publication involving both nationalities”.

The agreement is an opportunity to internationalize the institution, expanding the researches to other territories and contributing, in this way, to the development of agriculture all around the world. “Many times the promotion of our university depends on the positive results with students or alumni, as it was in this case of contacting Ecuador”, commented Nussio.

The union between ESALQ and Ecuador was intermediated by Mariuxi Torres, which took his Master and Doctor Degree in Entomology at ESALQ, orientated by Professor José Roberto Postali Parra and then, she was able to get to know the solidity of USP and have the basis of graduation. Nowadays, Mariuxi is Minister Cavallos’ assessor and gave the Minister the idea to have an approximation with the institution and to propose the partnership from the need to solve agrarian issues related to climate conditions not always favorable to their country. “First we talked to Professor Paulo Sentelhas, which is from the area of agro meteorology, and then Professor Durval opened the possibility to advance in a partnership in Phytotechnology”, tells Mariuxi.

To the Dean, this approximation not only represents prestige to the institution. “This action, initially, makes us very proud, we feel privileged and prestigious from the words of the Minister, which told that he could have searched for other institutions around the world but they decided to search for ESALQ. But this also takes us to a compromise and to a responsibility of presenting a formation program. When ended this agreement, this and other programs certainly will work to us as the biggest window of international visibility we could have”.

During his visit in the institution, the Minister Javier Ponce Cevallos met the ESALQ facilities and the Costa Pinto Mill (Raízen). “We worked together during many months and this will be a step that will enormously enrich the Ecuadorian nation”. In Brazil, in addition to the partnership with ESALQ, they will also sign a cooperation agreement with EMBRAPA (Brazilian Agricultural Research Corporation).